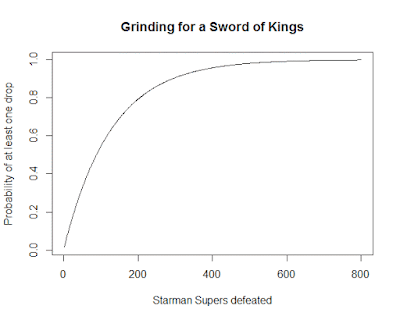 Anyway, don't bet on getting that rare drop -- you may find yourself grinding much longer than you'd thought.
Posted by Joe at 12:14 PM No comments:

Some months ago, a paper argued for the validity of an unusual measurement of aggression. According to this paper, the number of pins a participant sticks into a paper voodoo doll representing their child seems to be a valid proxy for aggressive parenting.

Normally, I might be suspicious of such a paper because the measurement sounds kind of farfetched. Some of my friends in aggression research scoffed at the research, calling bullshit. But I felt I could trust the research.

Why? The first author has published null results before.

I cannot stress enough how much an author's published null results encourages my trust of a published significant result. With some authors, the moment you read the methods section, you know what the results section will say. When every paper supports the lab's theory, one is left wondering whether there are null results hiding in the wings. One starts to worry that the tested hypotheses are never in danger of falsification.


In the case of the voodoo doll paper, the first author is Randy McCarthy. Years ago, I became aware of Dr. McCarthy when he carefully tried to replicate the finding that heat-related word primes influence hostile perceptions (DeWall & Bushman, 2009) and reported null results (McCarthy, 2014).

The voodoo doll paper from McCarthy and colleagues is also a replication attempt of sorts. The measure was first presented by DeWall et al. (2013); McCarthy et al. perform conceptual replications testing the measure's validity. On the whole, the replication and extension is quite enthusiastic about the measure. And that means all the more to me given my hunch that McCarthy started this project by saying "I'm not sure I trust this voodoo doll task..."

I see it as something like a Receiver Operating Characteristic curve. If the classifier has only ever given positive responses, that's probably not a very useful classifier -- you can't tell if there's any specificity to the classifier. A classifier that gives a mixture of positive and negative responses is much more likely to be useful.

A researcher that publishes a null now and again is a researcher I trust to call the results as they are.

[Conflict of interest statement: In the spirit of full disclosure, Randy McCarthy once gave me a small Amazon gift card for delivering a lecture to the Bayesian Interest Group at Northern Illinois University.]