The paper in question looks about like you'd expect: an unusual measure of aggression, a complicated 3 (within) × 2 (between) × 2 (between) design, a covariate tossed into the mix just for kicks, a heap of measures collected and mentioned in a footnote but not otherwise analyzed. It didn't exactly change my mind about ego depletion, much less its role in aggressive behavior.

But it'd be hypocritical of me to criticize this ill-timed paper without mentioning the time I reported an ego-depletion effect through effect-seeking, exploratory analysis. I've also been meaning to change my blogging regimen up a bit. It's time I switched from withering criticism to withering self-criticism.

The paper is Engelhardt, Hilgard, and Bartholow (2015), "Acute exposure to difficult (but not violent) video games dysregulates cognitive control." In this study, we collected a hearty sample (N = 238) and had them play one of four modified versions of a first-person shooter game, a 2 (Violence: low, high) × 2 (Difficulty: low, high) between-subjects design.

To manipulate violence, I modified the game's graphics. The violent version had demons and gore and arms bouncing across the floor, whereas the less violent version had silly-looking aliens being warped home. We also manipulated difficulty: Some participants played a normal version of the game in which monsters fought back, while other participants played a dumb-as-rocks version where the monsters walked slowly towards them and waited patiently to be shot.

Our hypothesis was that playing a difficult game would lead to ego depletion, causing poorer performance on the Spatial Stroop. This might have been an interesting refinement on the claim that violent video games teach their players poorer self-control.

We needed some kind of effect to publish, so we reported an exploratory analysis, finding a moderated-mediation model that sounded plausible enough. 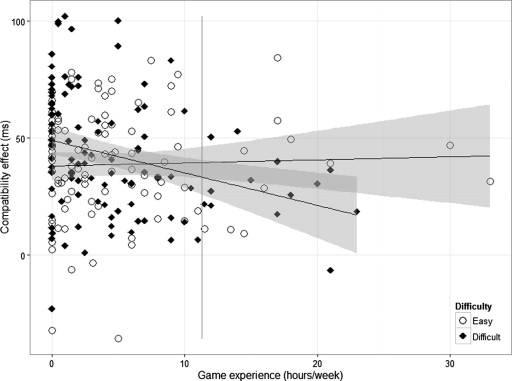 The conditional indirect effect of game difficulty on Stroop compatibility as moderated by previous game difficulty wasn't even, strictly speaking, statistically significant: p = .0502. And as you can see from our Figure 1, the moderator is very lopsided: only 25 people out of the sample of 238 met the post-hoc definition of "experienced player."

And the no-go trials on the Stroop? Those were dropped from analysis: our footnote 1 says our manipulations failed to influence behavior on those trials, so we didn't bother talking about them in the text.

So to sum it all up, we ran a study, and the study told us nothing was going on. We shook the data a bit more until something slightly more newsworthy fell out of it. We dropped one outcome and presented a fancy PROCESS model of the other. (I remember at some point in the peer review process being scolded for finding nothing more interesting than ego depletion, which was accepted fact and old news!)

In the end, I'm grateful that the RRR has set the record straight on ego depletion. It means our paper probably won't get cited much except as a methodological or rhetorical example, but it also means that our paper isn't going to clutter up the literature and confuse things in the future.

In the meantime, it's showed me how easily one can pursue a reasonable post-hoc hypothesis and still land far from the truth. And I still don't trust PROCESS.
Posted by Joe at 4:05 PM