I'm a new assistant professor trying to set up my research laboratory. I thought I'd try making the jump to PsychoPy as a way to make my materials more shareable, since not everybody will have a $750+ E-Prime or DirectRT license or whatever. (I'm also a tightwad.)

My department has a shared research suite of cubicles. Those cubicles are equipped with Dell Optiplex 960s running Windows 7. I'm reluctant to try to upgrade them since, as shared computers, other members of the department have stuff running on them that I'm sure they don't want to set up all over again.

In this process, I ran into a couple of bugs on these machines that I hadn't encountered while developing the tasks on my Win10 Dell Optiplex 7050s. These really made life difficult. I spent a lot of time wrangling with these errors, and I experienced a lot of stress wondering whether I'd fix them in five minutes or five months.

Here for posterity are the two major bugs I'd encountered and how they were resolved. I don't know anything about Python, so I hope these are helpful to the equally clueless.

Initially, PsychoPy tasks of all varieties were crashing on startup. Our group couldn't even get the demos to run. The error message said pyglet.gl.ContextException: Unable to share contexts. 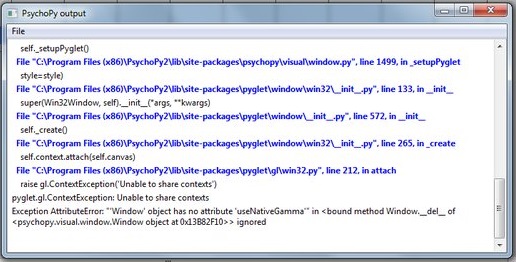 Apparently this can be an issue with graphics drivers on some machines. Updating my drivers didn't fix the problem, perhaps in part because the hardware is kind of old.

This error was resolved by specifying an option for pyglet. I used PyschoPy's Builder View to compile the task. This made a file called Task.py. I opened up the .py file with notepad / wordpad / coder view / code writer and added two lines to the top of the script (here in bold):

My Word Pronunciation Task requires the use of a microphone to detect reaction time. Apparently this was a simple task for my intellectual ancestors back in the 1990s -- they were able to handle this using HyperCard, of all things! But I have lost a lot of time and sleep and hair trying to get microphones to play nice with PsychoPy. It's not a major priority for the overworked developers, and it seems to rely on some other libraries that I don't understand.

Trying to launch my Word Pronunciation Task lead to the following error: PortAudio not initialized [...] The Server must be booted! [...] Need a running pyo server." 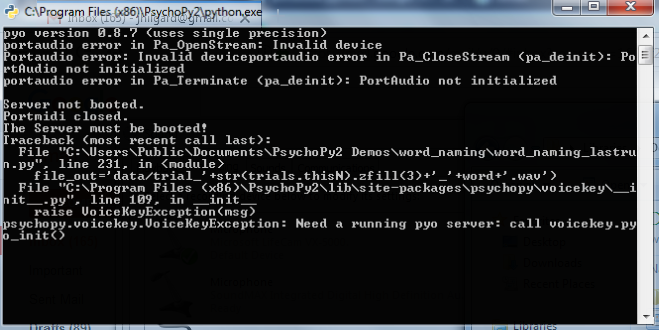 This was fixed by changing Windows' speaker playback frequency from 48000 Hz to 44100 Hz. 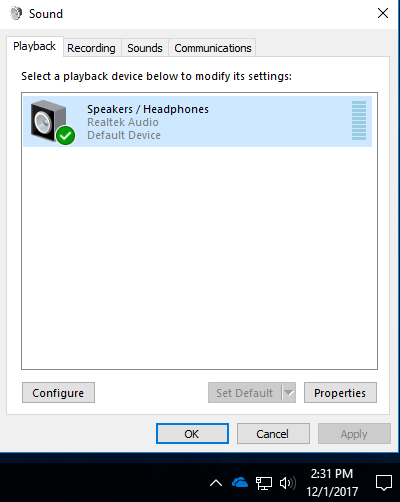 Right click on the Volume icon in the taskbar and open up "Playback devices." 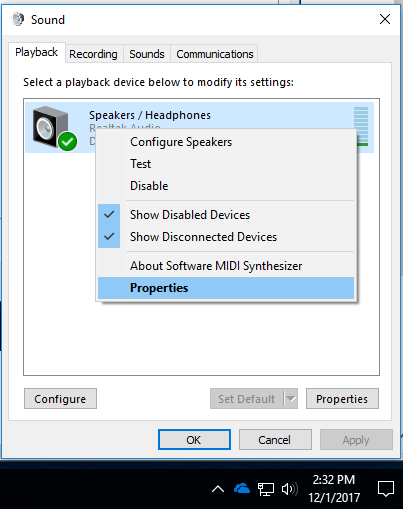 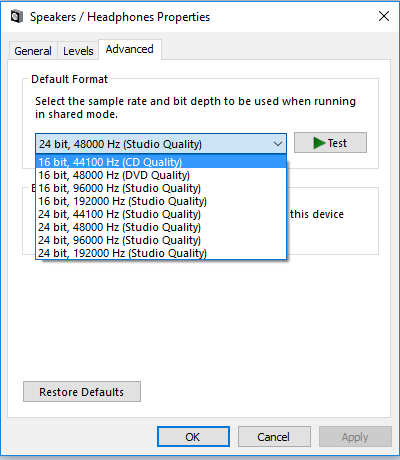 This strangely oblique tweak was enough to fix my Portaudio problems.

Now that I can use all these computers, I'm looking forward to scaling up my data collection and getting this project really purring!

Thanks to Matt Craddock and Stephen Martin for help with the "shared context" bug. Thanks to Olivier Belanger for posting how to fix the Portaudio bug.